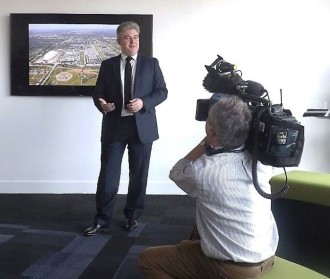 The Government’s Planning Minister, the Rt Hon Brandon Lewis MP, visited Central Milton Keynes on Thursday 5th March to mark another first for Milton Keynes: Britain’s first ever referendum for a Business Neighbourhood Plan. The CMK Alliance Plan is an ambitious blueprint for the development of the city centre of Milton Keynes over the next 15 years, prepared by an alliance of local residents and business leaders.

“We’ve tried hard to get the balance right between the need for growth and change, and the need to keep CMK special, and true to itself,” says Paul Hunt, co-chair of the CMK Alliance and Head of Branch of John Lewis in the city centre. “It’s been refreshing to have a frank dialogue between business and residents. We all agree that CMK has a unique appeal, and we want to build on its strengths while also helping to generate the next wave of growth.”

We all agree that CMK has a unique appeal, and we want to build on its strengths

Dr Rebecca Kurth, chair of CMK Town Council, says, “It’s a pioneering plan and reflects the ‘can do’ attitude of Milton Keynes.  Whilst many town centres across Britain are in decline, CMK is a real engine for prosperity.”

CMK is the largest employment area in Milton Keynes with over 35,000 workers, and the Plan supports the delivery of an additional 15,000 jobs.  Milton Keynes is the UK’s top city for jobs growth, according to the latest Centre for Cities report.

Whilst fifty neighbourhood plans have already been adopted around the UK, this will be the first business neighbourhood plan in Britain, designed specifically for predominantly commercial areas such as CMK. Two separate referendums will be held, one for residents and another for businesses, to decide whether or not the plan will be adopted. Although the plan focusses on Central Milton Keynes, the referendum will take place across the borough, involving 170,000 electors and 7,000 businesses, making it the largest vote on a neighbourhood plan to date.

Tweets by @VoteYesCMK
Vote for Future