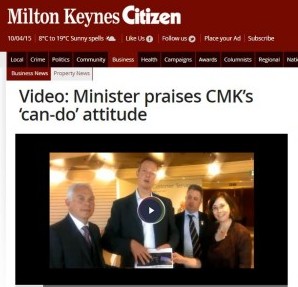 Volunteers from the business community and local residents in Central Milton Keynes have spent 14 months hammering out a document that they want to take to a referendum as a united CMK Alliance plan.

Following a minibus tour of the new city with councillors and members of the CMK Alliance, he added: “I love the fact that you take the name of a “can-do” city.”

Watch the video and read the rest of the article in the Milton Keynes Citizen.

Vote for Future
Scroll to top